On the Autumn/Winter runways traditional looks were twisted, shaken and subverted to create a trend that felt truly modern.

Plundering the past for inspiration, designers mashed up military detailing with country garb and ladylike chic to great visual effect. At Marc by Marc Jacobs the visionary designer showed his signature irreverence by sending out debutante bags and print dresses mixed with big-buttoned great coats, check capes, drummer boy hats and bovver boots. At Burberry Christopher Bailey took the hunting, shooting, fishing feel further with his Town and Field collection featuring tweed flat caps, herringbone jackets lined in shear- ling, waxed cotton parkas and shirts embroidered with sparrows, owls and dogs. At Acne quilted jackets got edgy with suede patches, whilst over at Miu Miu there was more of a crazed vintage feel with grandad checks, wallpaper prints, clashing ascots and frilly ties.

This look, often shown with stealthily luxe hair and aristocratic lit-from-within skin is undisputedly feminine, without ever being staid or saccharine. 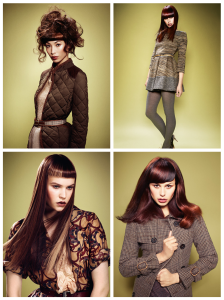 From Carnaby Street to Camden Town via the left bank and Warhol’s NYC Factory, this season’s nod to the iconic 60’s was multifaceted, but always with a young, cool edge.

Houndstooth, that iconic sixties staple, was also a big trend. At Henry Holland it was overblown and shown in electric hues, whilst at a L.A.M.B it was rock ‘n’ roll, combined with twiggy lashes, flirty mini skirts, cocoon coats and roll necks. 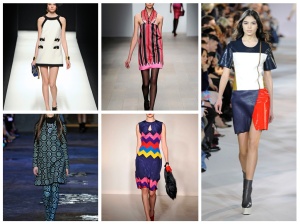 But most wanted was Holly Fulton’s collection, her 60’s shaped mini dresses, boxy jackets and turtlenecks in crazy prints and bright, bright hues had the front row mentally making room in their overstuffed wardrobes.

Like the world’s business leaders, fashion designers are looking East for inspirati- on. Proenza Schouler kick-started the trend with inspiration running from karate and kimonos to Yoko Ono circa 1970.

Marni deviated from its usual boho look and showed lean black tunics with side slits, teaming them with straight, super shiny hair. Gold embellishment and an omnipresent cherry red colour more than nodded to the Orient, as did the kabuki soled shoes with gold metal toe caps. Equally sensual, but striking a darker note was Jonathan Saunders. Red, red lips and sleek hair gave strength to his delicate Japonaiserie, as did pairing it with more utilitarian pieces. Antonio Marras, Peter Pilotto and Vera Wang also used Chinoiserie to striking effect, all creating an exciting fusion of East Meets West that the politicians would do well to learn from.

This season fashion writers from across the globe were furiously scribing ‘andro- gynous, futuristic, powerful, strong’ and ‘definite Rooney Mara influence’ in their Smythson notebooks. Black, black, black and with a hint of black was the colour palette for this trend, with strict, sharp lines echoing the edgy vibe.

In New York 3.1 Phillip Lim was all about ‘modern day superheroes,’ with capes, sharply creased trousers, tailored coats and pointy-toed shoes all communicating a strict, noir-ish vibe. At DKNY there was workable, sharply creased trousers, boxy jackets with leather sleeves and tight turtlenecks, all in Karan’s regulation black. Across town at Hervé Léger by Max Azria there was a simmering sexual undercur- rent created with python stamped black leather, wild black fur, leather harnesses and straight blunt cut pony tails. Versace amped up the gothic element with a plethora of crucifixes, whilst Simone Rocha and Costume National went further with an edgy other worldly vibe, the latter calling their Matrix slick collection ‘New Wave-No Wave-Dark Wave.’ 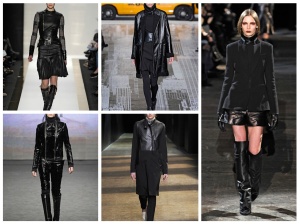 But Givenchy was the stand out show for this look. Influenced by photographer Guy Bourdin, hair had a glass like shine, lips were dark blood red. The clothes were heavy on leather and fur, with over the knee boots, pleated leather skirts and jodhpur shaped trousers that seemed to shout ‘mess with me at your peril.’ 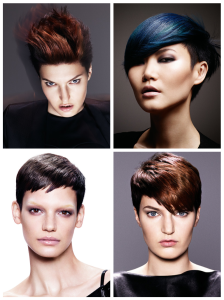 Neo Couture: BLACK IS BACK

This team is comprised of 3 key ambassadors each representing their specialist field; cut, styling or colour

The team members are

Styling: Bret Holmes from The Salon

It is their task to learn the new direction, understands its values and the techniques and then reinterpret these to pass on to the wider salon industry

To see our work, check us our on Facebook 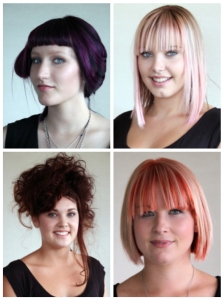